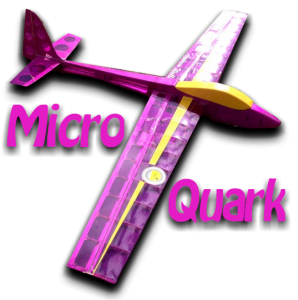 Sometimes, you just design a glider, more for the laugh than anything else, and then forget about it… This is the case for the Micro Quark presented here. I designed it at the same time as the Quark 2M, just because… Well, why not! I gave a few kits to friends if they wanted to play with it, and I have to say, I did not think much about it, and concentrated my attention to the Quark 2M and its success that followed. I received a phone call last week, from Ronan, a guy that lives in Normandy, and during our conversation he asked me if I had a kit left for the Micro Quark for another friend… I was surprised he still had his glider, only to hear that his Quark was not leaving his car! He was flying it everywhere he goes, regardless of the wind, and this was a really fun glider! OK, hold on a minute… Don’t you just say that because you want a kit? Hell no! We want more of them! Right, time to go through the forum again, and look for the Micro Quark threads… And the flight reports were indeed really looking good at the time! How I missed that, I don’t know, but today, the Micro Quark is back! I made a few changes on the plan, so the model should be even lighter. Minimum amount of wood is needed, and I think you can get it done in less than a week from start to finish, or on the coffee table while watching TopGear with Jeremy Clarks.. Oh…

The build is relatively simple, just one or two things to be careful with, like the bell crank installation and the cutting of the ailerons, but that’s what beer is for! Have a drink while studying carefully the plan for your next move, and everything should be fine! Photos are self explanatory for the build, so I will not detail it here, but the forum is open if you have any questions for the build or to show us your build! 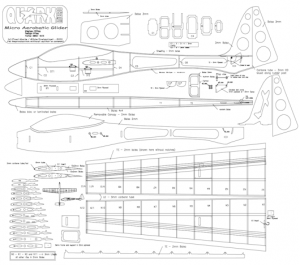 • Plan in A4 sheets to be assembled: All free! How cool is that! 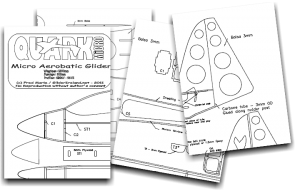