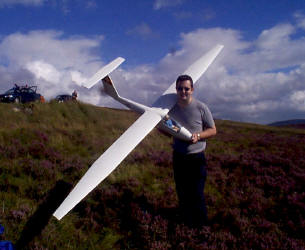 Carl Report for this model ( see the entire threat in RCGroups here (More photos and comments)) :

Model is 1/5 scale giving a 3m span. Glass fuse, foam/veneer pre-covered wings and tail, joiner tubes etc pre-fitted. Stated weight was 2000g, mine came in at nearer 2500g. I very much doubt you could manage 2000g as I used very lightweight radio gear, though maybe the fin-mounted elevator servo I opted for would account for maybe 150-200g of the overshoot. (Allowing for the additional compensating nose weight of course. My servos aren't that big!)

The diagrams in the "instructions" show a snake-driven elevator, the instructions discuss putting the servo in the fin. I went the latter route as snake-driven T-tails are plugged with slop in my experience. (At the very least use a bellcrank...) No control throws given either, so it's "looks about right" for now. Cockpit isn't going to win any comps, but it's okay for about 2 hours extra work: (The map was produced by using a digital photo of a large-scale map of the area I fly.)

Overall the quality of the kit is excellent, but with a few snags. The individual components like the wing and fuselage are excellent, the covering on the wing is top class. Really good double-height brakes pre-fitted. I LOVE the markings, cut vinyl, they're the best quality markings I've ever applied.

The problem is that it seems at times as if each part was built in different towns! The rear wing rod for example wouldn't fit into the tube epoxied into the fuse. (I removed the tube and epoxied the rod into the fuse as it only protrudes an inch out from the root anyhow.) Seems that the kit has been "developed" but certain parts of the factory didn't hear about the changes! However there's nothing anyone with a few planes under their belts won't sort out easily. It's a true "ARF" and I feel it was very good value for the quality.

Well, the Pilatus has flown, and rather nicely too. Conditions were very scratchy, but she managed a couple of decent flights, managing to consistently out-soar a 4m all-molded DG1000 no less ( Arrrggg.. lucky !!  :o))  ). On the one occasion I had some height in hand she rolls very nicely, loops are nice and big too. General handling is flawless, the stall is very tame. This would make a lovely entry-level scale plane. Anyone with aileron experience could fly it no problem.